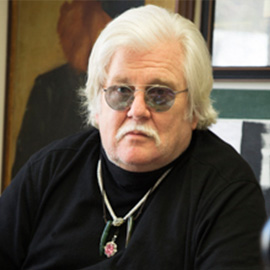 Chris joined TRA360 in 1999 and is the second longest–standing employee of the company. He directs our finance and marketing efforts.

Chris’s varied, deep, and eclectic history had him working in finance, as a technical writer, in publications and software production, marketing communications, and advertising.

A graduate of Harvard University and Parsons School of Design, Chris remains a lifelong learner, who is always interested and curious for new ideas.

Chris has also done theatrical stage management for the late Dudley Moore. He is an avid amateur weather forecaster and a licensed amateur radio operator. Chris is a published poet and metaphysical writer. He composed and played the soundtrack for Joanne Liskin’s documentary film: Alternative Healing Approaches for AIDS.

His curiosity has driven him to author an extraordinary range of books, including four books of poetry (in both English and French), three books on economic mass movements and politics, one book on Confucius, and three books on Buddhism and Hinduism. A recorded musician, Chris has even had his paintings exhibited at MIT. Currently, he is principal and founder of Ivan Mars Future Media.